Our Associate Artists are part of our wider community who use puppetry and animation as part of their practice. They work in a variety of settings from community arts to the film industry.

Want to become an Associate Artist?

Our Associate Artists benefit from:

To become a Puppet Place Associate Artist costs just £20 per year. Membership is via online application and we aim to notify all applicants of our decision within two weeks.

The Otherstory is a Bristol-based collective of puppeteers, activists and musicians committed to telling stories that are playful, political and run counter to the narratives of the powerful.

Jean is a musician and performer who works in theatre and circus. He is also a woodworker and welder who builds theatre sets and props.

Director, performer, dramaturg, producer, improviser and devisor. Co-director of The Wardrobe Theatre, Closer Each Day Company, The Smoking Puppet Cabaret and member of Beyond The Ridiculous.

Anna works with many different people from a multitude of backgrounds on arts and media projects, helping organisations and individuals tell their stories and find creative solutions to their concerns.

A puppeteer, puppet maker and designer. She tours with Stuff and Nonsense Theatre Company and is the founder of Mumblecrust Theatre based near Weston-super-Mare.

The MakeShift Ensemble creates theatre on stage, off stage and all about. exploring physical ensemble performance in all its forms as a tool for engaging, affecting and pass on the story. They explore all forms of puppetry and object manipulation as part of their practice.

Trevor is a puppeteer and puppet maker working mainly with Otherstory – a collective of puppeteers, artists and musicians.  He has experience of creating and performing in various puppetry media including live animation, shadow puppetry, paper theatre and large street puppets.

Noisy Oyster is a puppet company who perform in theatres, schools, festivals – both national and international.  They use rod, table, marionette, shadow and big costume puppets.

Christopher is a theatre maker, writer and illustrator working primarily with physical storytelling that uses animation and projection.  He was co-artistic director of Rhum and Clay Theatre Company from 2010-2016, creating visual, physical theatre, and now works independently creating solo pieces as well as collaborating with other artists.

Tomasin is Artistic Director and Producer of Soap Soup Theatre, proud makers of devised visual theatre who use puppetry, object manipulation and clown to create theatre for family audiences.  Their work is design led, with colourful and creative design, tactile puppets and inventive object work.

Emma is a freelance puppetry director.  For the last nine years she has been Performance Director for The Royal Welsh College of Music and Drama’s Design and Puppetry Production.  Emma also makes outdoor, site-responsive performances with designer and puppet maker Mary Drummond.

Emma is an experienced puppet fabricator and designer with experience across film, television and theatre. In addition to her own practice, she regularly collaborates with other artists and production companies to bring projects to life.

Katie is an Australian Puppeteer and Puppet Maker based in Bristol. She has trained as a Puppeteer at the Curious School or Puppetry (UK) and as a Designer/Maker at the National Institute of Dramatic Art (AU). She has worked as a Puppeteer & Maker for film, television and theatre in both Australia and the UK. She has most recently worked in the Puppet’s Department on Wes Anderson’s stop motion feature film ‘Isle of Dogs’ & as an Assistant Puppeteer for a series of promo videos for Ed Sheeran’s new song ‘Happier’ (Atlantic Records). You can follow her work @katiewilliamspuppetry

Isabel is a performance maker, puppetry specialist and visual artist. She works in collaboration with theatre companies and a network of individual practitioners combining performance and puppetry. Isabel is passionate about working in education, running workshops that develop practical skills and encourage creative thought. She believes that creative work can have an incredible transformative effect on both the participant and audience.

Carmen’s work rethinks our ideas of dolls and reconsiders the roles they play and the properties assigned to them which can illuminate a culture’s beliefs and value. Her practice allows the creation of an extra-ordinary world, where imagination is the ultimate liberation and play and the real world can seep into each other. By animating dolls it is possible to creating changes in play which become tangible in the real world.

A designer and fabricator, exploring the anthropomorphisation of objects: in software, puppetry and robotics. Taking inspiration from the animal kingdom to invent the behaviour of objects.

Pins and Needles Productions create quality theatre for families and young adults. They are passionate about finding
theatrical, imaginative ways of telling stories to challenge expectations and ignite audiences’ senses.

Hell’s Pigeons are puppet makers and performers. They have worked collectively together for 10 years on many projects to do with set design, construction and performances. Automatons, stick n rod, life-size puppets and marionettes, are all part of their growing family!

Araceli Cabrera is a Chilean performer, dancer, puppeteer and fabricator based in Bristol. She has previously worked as Artistic Director for Distillers Dreams Shadow Theatre in Spain and Producer and Director for Art Post Dance Theatre in Chile. She has several years experience of leading performing arts workshops in educational settings. She is an art facilitator with Invisible Circus in their social circus project Invisible Youth.

Helena is a a props and puppet maker, specialising in stopmotion puppet fabrication and sculpting.

The Original Spinners are an inclusive Community dance company based in Bristol. They create happenings, participatory performance and walkabout theatre. Complementing our use of music and dance we introduce elements of clowning, puppetry, storytelling and play to create honest, simple and magical experiences for audiences of all ages.

Josh is a Bristol based  Actor and Puppeteer who works extensively in theatre, television and film. He has worked for companies including, The National Theatre of Scotland, The Tricycle Theatre, Norwich Puppet Theatre and in The West End. As a Puppeteer his work can be seen on CBBC, Netflix and Disney in productions like, ‘Dark Crystal’, ‘Strange Hill High’, ‘ZingZillas’ and ‘Jim Henson’s Pajanimals’.

Elise Timm-Bottos is an interdisciplinary artist, performer and puppeteer. She is currently based in Montreal, QC. Her specialties range from the very large to the very small, with special affinity to the extremes, giant puppets and miniatures.

Adam fell into puppetry through an acting job back in 2014, and has been besotted ever since. As a puppeteer he has worked with a variety of different types, from rod to Bunraku and large scale animatronics. His puppet making practice became more serious when he started his production company Bears & Vagabonds with a passion of making “trash” puppets out of majority(or completely) discard materials, scraps and general rubbish.

Our Associate Artists benefit from:

To become a Puppet Place Associate Artist costs just £20 per year. Membership is via online application and we aim to notify all applicants of our decision within two weeks.

Both Puppet Place and the puppets take your privacy seriously and we work hard to ensure that the data you share with us remains secure. To find out more about our data protection policy please click here. 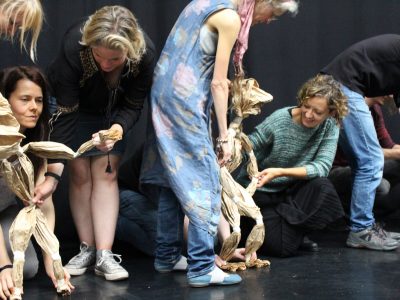 What Workshops would you like to see at Puppet Place?

Hello! We're conducting research for future workshops at Puppet Place and we'd love to hear your opinions and thoughts on what type of workshops you'd like to see available. The survey should only take 5 minutes and we would be grateful for any feedback you could give.